Dutcham Brazil > Events > Dutch Embassy Webinars on "Doing business in Brazil during and after the corona-crisis"
Published at: 8 juni 2020 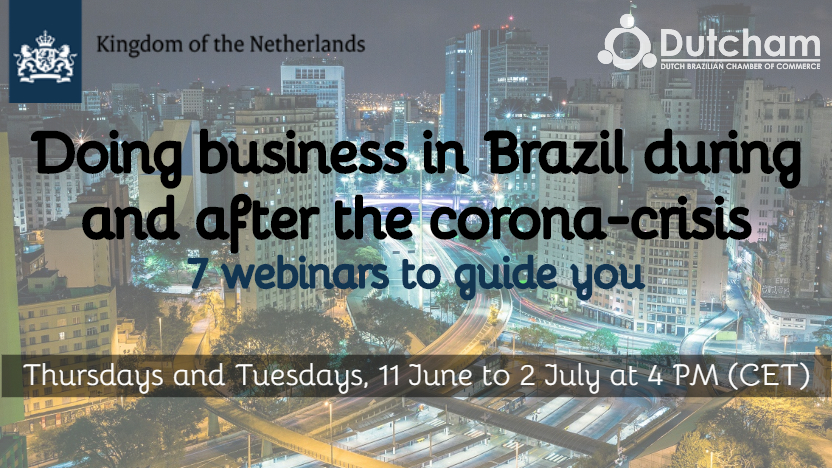 Brazil has been hit hard by the corona-crisis. What does this mean for Dutch entrepreneurs active here? The Economic Network in Brazil will update you on the developments in a series of 7 webinars.

Brazil is the largest economy in Latin America with an internal market of 210 million inhabitants. The country has been hit hard economically by the crisis, but the differences are large by region and sector. With aid programs, the Brazilian government supports companies and individuals who are at risk.

Economic consequences after corona
In Brazil, the corona pandemic will reach a peak later than in Europe. The growth in the number of infections in major cities is increasing. The governors of almost all federal states have taken measures to prevent the virus from spreading. In the southeastern and southern regions, the relaxation of the measures is starting to take place in phases. The economy is starting up again in some federal states. In the agricultural sector, production and exports have continued. Privatizations are now being resumed at federal level. The goods flows by sea and by air, also directly from the Netherlands, are uninterrupted and gradually increasing in volume again.

Series of webinars from the Economic Network
In order to provide insights on the current situation and the possibilities that arise with this crisis, the Economic Network in Brazil organizes a series of 7 webinars. The network includes the Embassy in Brasília, Consulates General in Rio de Janeiro and São Paulo and NBSOs in Belo Horizonte and Porto Alegre. Specialists from these organizations and from the Dutch-Brazilian Chamber of Commerce (Dutcham) share their knowledge with external guest speakers during these webinars.
These webinars are focused on Dutch entrepreneurs with an interest in doing business with Brazil.

Registration & Practical Information
• Register for the webinar of your choice by sending an e-mail to bra-ez@minbuza.nl;
• You can submit your questions in advance when registering, or ask the speakers via the live chat box during the webinar;
• Participation is free of charge;
• You can register for the webinars no later than one day before;
• Registrations are limited to 100 participants per webinar;
• Each webinar lasts an average of 40-45 minutes and consists of an introduction, a presentation and Q&A;
• The webinars will be held in English. Questions can be asked both in English and Dutch.

Information on the webinars in Dutch